An Introduction to Interviews

An Introduction to Interviews

If you're reading this, that means you likely just got your first invitation to interview — congratulations!! Did you give yourself a chance to celebrate? If you haven't, go bask in this triumph for a while; we'll be waiting.

Feeling celebrated? Great! Let's get back down to business.

This article will cover interviewing basics and address the following questions:

Why does the interview matter?

The grad school interview is important for so many reasons. It’s the final hurdle in the admissions process, and even more importantly, your final chance to make a good impression. It allows you to add new depth to your brand through personal connection and gives you an opportunity to prove yourself when it comes to the intangibles you’ve alluded to in your essays, resume, and recommendations. Lastly, schools are requiring (or should we say offering?) fewer and fewer essays each year, so the interview is more important now than ever before.

What role does the interview play?

What most applicants fail to recognize about the interview is that it’s essentially a screening process. If 70% of applicants are admissible and only 15% actually get in, how are the rest of them eliminated? While many will be cut based on mediocre essays, lackluster resumes, bad recommendations, or simply a lack of originality, 30 to 50% of applicants will make it to the interview round. Below you can see a breakdown of each “cutting” stage of the admissions process. 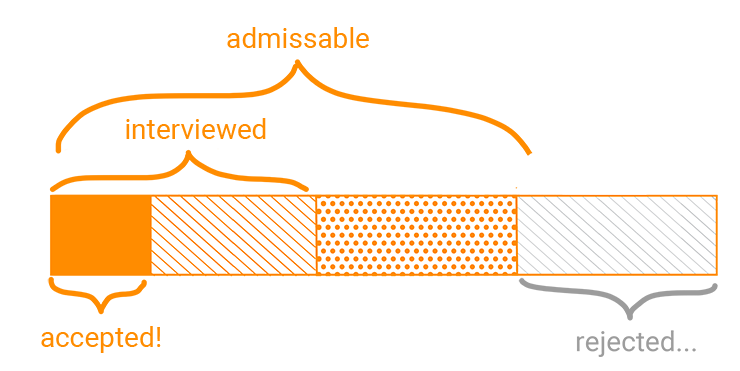 So what does this tell us about interviews? First, they’re (usually) invitation-only. If you don’t get an interview invitation, it’s very unlikely you’re going to be accepted. Second, once you reach the interview round, you’re competing against candidates who have already piqued the school’s interest. A great interview can’t save you from the earlier cuts (you won’t get the chance!) and a bad interview will give you the boot... Not ideal.

So the interview round is more about avoiding big mistakes than it is about making an impression (but making no  impression at all is a big mistake). For tips on how to make an impression, watch How to Prepare for Your Interviews.

What if the interview is optional?

Do the interview anyways. Since interviews are used to screen candidates, schools rarely make them optional. If they do, it’s almost never in your best interest to opt-out. If you choose not to schedule an optional interview, school’s will assume a lack of interest and your application will lack the personality and depth an in-person interview would have provided. Even more importantly, admissions officers will like you better if they meet you in person. Admissions representatives are people too, and part of their evaluation is based on their subjective perception of you.

What if the interviews are open-invitation?

What are admissions representatives looking for?

On one hand, admissions representatives are looking for the key skills and attitudes that will make you a successful student of their program. They look for attributes like good communication, intellectual aptitude, professional focus, plans for meaningful contribution, and passion for the school and program.

On the other hand, admissions officers are also looking for the somewhat indefinable quality of likability. Successful politicians are often described as “someone I’d like to have a beer with.” This sense of friendliness, a feeling that you’re playing on the same team as them, can make or break your case in the eyes of an interviewer. And while many applicants can radiate rainbow-level positivity while they’re answering all the questions they saw coming, few can maintain this aura of sunshine for the entire duration of the interview, or in the face of an unexpected turn of events.

Beware! Admissions representatives know that you’re trying your hardest, and they may very well try and get you to slip up. This is not because they don’t want you to succeed, but because they want to see the real you. They’re looking for genuine, not feigned, passion. And they’re keeping an eye out for overconfidence and laziness. Be wary of the admissions officer who seems a little too casual; they might be trying to catch you off guard.

How is the interview evaluated?

In a literal sense, your interview will be evaluated using a numerical system created by the school itself. These systems generally include the dimensions we mentioned above, but that isn’t all. Interview scoring systems are complex processes that generally look like this:

The general summary and recommendation are where an interviewer will argue your case (if you’ve convinced them it’s worth the effort). If you had a particularly strict or lax interviewer, this will probably be taken into account. Additionally, the admissions committee is likely to put more weight on an interview performed by a fellow school official than one done by an alum. All of these factors will be considered as an evaluation of your candidacy continues, and it’s likely that your interview notes will pass through several hands before a decision is made.

How long does the interview take?

Most graduate school interviews are conversational in nature, with an average of just 10 questions. An interview can last anywhere from 30 minutes to an hour, and giving short answers is more likely to earn you extra questions than it is to let you out early, so don’t be afraid to add nuance and texture to your responses through added details.

How do I answer interview questions?

For the most part, you can follow your interviewer’s lead regarding the length of your answers (if you’ve researched your interviewer ahead of time, you might already have a guess about this). If they’re shutting you down (e.g., “Okay, great.”), move on. If they’re posing clarifying questions or asking you to elaborate, keep going! As a general rule, you should never spend more than 3 minutes answering a single question. Every answer you give should begin with your two to three main points, so that your interviewer doesn’t miss half your answer if they cut you off (fingers crossed, they won’t!). Then, follow up with your supporting details to cement your answer.

Here are some common questions you might encounter in an interview:

Also in this step: